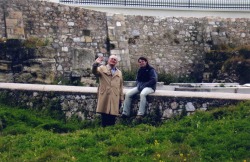 One of the funniest reasons I hear for not taking Latin is that it is anachronistic.  "There's no reason to learn a dead language."  "My son needs to be able to do business with the Chinese." "My daughter shouldn't have to memorize all these charts!"  Most other responses assume we're continuously dissecting the cadaver of the worn out old tongue of imperialist oppressors.

I think this must be because people who have not studied Altamont Latin and/or Greek don't exactly understand the study of Classics and what it entails here.

I couldn't agree more that a Dead Poets Society professorial caricature of a Latininist is silly; a stuffy geezer riding the Ivory Tower into his own little golden age.  We are not about romanticized notions of a fabricated golden age: tweed and pipes and dulce et decorum est, not to mention the memorization of charts and grammar tables ad nauseam.  While it is tempting to search for a golden age of the study of Latin, as true classicists know, most golden ages exist only in perception anyway—and only after the fact.  Homer was written down 700 years after the Trojan War, Vergil 1400.  The Arch of Constantine incorporates hundred-year old sculpture from the time of Hadrian.  The beauties and freedoms of Athenian democracy, so lauded in Pericles' funeral oration, had become so radicalized by the time of the Peloponnesian War that they hardly had any impact.  The first philhellene, Flaminius, declared Greece free and proclaimed a new age only for the indifference of Mummius to steamroll Achaea fifty years later.  Modern scholarship too does not escape its own romanticized notions as much of it concerns decontextualizing 'modern' topics like immigration or slavery or whatever; it seems to be reaching for a golden age itself as hagiolater of the '60s.

So you see, it is not a paradox that the true student of the ancient world knows golden ages themselves, whether antique or modern, to be phantasms.

We're not about nostalgia.

Studying the classics here makes the student realize the cyclical syntheses, to use Marxist lingo, of history and evaluate them for what they are—or were, or will be.  Any Altamont classicist can make the critical thinking decisions so lauded and foundational to the liberal arts education and necessary for tomorrow's job market, even in China.  Of course our study is largely in Latin and Greek; they are essential for reading architecture, science, engineering, history, et alia in a multicultural context.

Oh, yes.  Latin is a multicultural language.  After the collapse of the Roman Empires, Latin and Greek were the only sort of international communication available and they still bridge different cultures and backgrounds.  Latin is the internet.  By Latin II Altamont students will have read love letters from Heloise to Abelard, about the capture of Jerusalem during the Crusades and the atrocities that followed, about Columbus' second voyage, about Boethius' philosophy, about architecture and civil engineering with Vitruvius, and about physics with Newton.  In addition to our readings and discussions we visit the world with GoogleEarth and NASA programs to learn the buildings in the Roman forum, track Caesar's marches through Switzerland, and follow the path of Roman roads and aqueducts.  We also learn about the latest in archaeological remote sensing techniques through satellite prospection and the use of geophysical tools for survey.

All of a sudden we are a collage of well-rounded and well-grounded students with different interests who agree with Professor Dubois that with more study, “…the effort to demarcate most predictably what is purely 'ancient', Western, or Greco-Roman becomes less and less possible.”  So the study of Latin and Greek at Altamont is continuously the study of innovation, new ideas, and a track of multiculturalism.   Our world will always be deep due to the number of years Greek and Latin have been around and the variety of expression within the languages but now it seems quite broad as well.   We are anthropologists, linguists, scientists, and mathematicians but most properly we are all of those things and more.  We are Altamont Classicists.