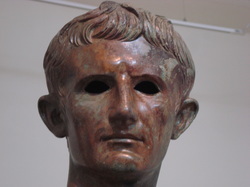 So you have decided to take Latin.  Congratulations!  You will soon have a much broader understanding of the human condition through this guided introductory study of the Roman world.  Also, you will soon be ready to acquire rapidly a ready and cheerful knowledge of Spanish, French, Italian, Portuguese…even Romanian!   By taking Latin you have embarked upon a path that is not easy.  From Charlemagne to World War I, a Latin education was the basis of any education in the Western world.  It is multi-cultural, cross-disciplinary, and other hyphenated catch-phrases.  It will help you to develop discipline and foster an intellectual life.  You will soon be more cognizant of the compositional styles and syntax of the English language.  Your grammatical prowess will amaze your elders.  Latin encourages logical thinking.  Latin will help your critical thinking and decision making skills.  It will teach you about practicality.  Its literature will teach you about philosophy, history, art, archaeology, economics, politics, religion, mythology, law, medicine, education, nature, conservation, war, diplomacy, relationships, what it means to be ‘free,’ censorship, oppression, democracy, and ingenuity.  Most importantly, it will expose you to Heroes and the great and the wonderful.

Latin I is heavily grammatical.  You will be expected to learn the Latin noun in its entirety.  We will begin your study of the verb, which will be continued, expanded and nuanced in Latin II.  My task in the first year is to teach you the basics of Latin and guide you through an elementary history of antiquity.  Along the way we will practice reading out loud, perform some spoken Latin dialogues, study mythology, and learn a good deal of vocabulary.  You will have a major assessment and no more than four quizzes in each two week cluster.  I expect you to invest fifteen to twenty minutes a night of work at home reading.  Almost always I will give homework and quizzes.  It is essential you put in time at home in preparation and perform in class.  We will have a test somewhere every White week. Vocabulary quizzes will be taken every fortnight; the words are posted chapter in the float-down-link in the toolbar.  A possibility of three other quizzes exist.  Always be ready for pop quizzes by going over the previous day's lesson and doing any homework assigned in class.  The major assessments on White weeks and the vocab quizzes will comprise the majority points (120/rotation).  Work each fortnight will nearly dovetail with chapters from Latin for the New Millennium.  There will be handouts or class notes to cover any extra material.  You will have homework almost every night but it will most come in preparing for pop quizzes!

The year will be divided into three unequal parts:   We will begin our year with, and spend most of our time on, grammar and reading. After that:

After Christmas we will begin studying for the Classical Literacy Exam.  You will realize that you have learned much of the material already, but we will take an in depth look at cross-disciplinary topics.

In March we will spend one rotation specifically preparing for the National Latin Exam.  This exam is a national standardized test.  Students’ class grades will not be affected by performance on this test.  Nevertheless, students are expected and will be prepared to place well.

The highlight of our year will come early this year when we will attend the Alabama Junior Classical League convention in February.  This is a two-day convention where Latin students from all over the state compete in academic contests.  In preparation for this meeting the class will break into self-chosen groups for in-depth study of ancient history, English derivatives, mythology, Latin mottoes and phrases in popular usage today, Latin grammar, and all of the above.  All students will prepare as if they will attend the convention.  Those students attending the convention must bring with them appropriately sized Roman period dress to wear to the rubber chicken banquet.  Stay tuned for more information.

Fortnight I
The inflected noun: numbers, genders, and cases.  First declension.  The founding of Rome.
The verb has endings as well!  Principal parts.  Tenses and voices.  First and second conjugation.  Verb agreement.

Fortnight 2
Second declension masculine.  Vocatives.  Prepositions.  Authors from antiquity and beyond!  Revision of all grammar.

Fortnight 5
Sum and possum and other fury creatures.  Infinitive compliments.  Transitive verbs, or not.  Revision of all grammar, i.e. more drills.
Verb Review

The syllabus is written in elastic.  Expect modifications but no major shocks.